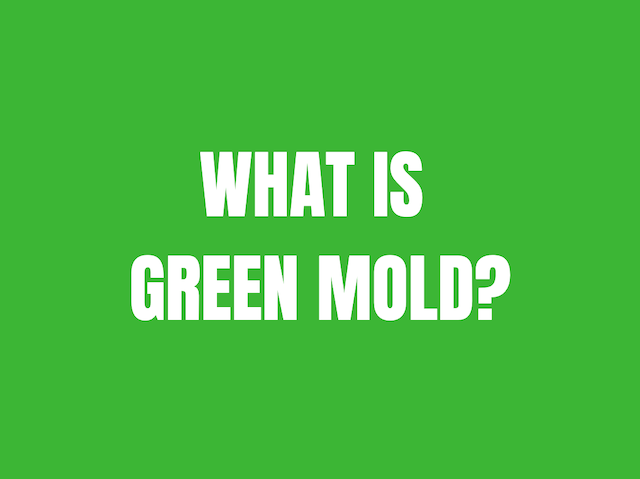 Mold, a type of fungus, is literally everywhere. There are over 100,000 types of mold and many of them grow in the same environments we live in, preferring the same temperature range as humans find comfortable to live in which can lead to mold in homes and mold remediation.

Not all molds are a threat, but generally, you don’t want to be breathing in more mold spores than you have to. All molds can be an irritant to the body, causing allergy responses which are more serious in some people than in others. Some molds, however, produce mycotoxins, making them particularly harmful. Unfortunately, it can be very difficult to determine the type of mold and whether or not it is toxic without professional help.

What is Green Mold?

For a while molds were classified by their color until it was discovered that the same strain of mold could appear in two or more different colours.

As such green mold is a collective term used to cover any molds that grow in shades of green. You’ve probably seen green mold growing on food and maybe on walls. It will often have a soft, furry appearance.

It is unclear exactly why the same type of mold can be more than one color but it is thought to be due to a number of factors including where it is growing, the climatic conditions, what it is feeding on and what is feeding on it. For example, some species of mold are thought to be shades of red or orange to put off predators. And molds that produce more melatonin which makes them darker are also hardier and more difficult to get rid of.

Although many species of mold can have a green appearance, indoors the three most common types of green mold you might find are Penicillium, Aspergillus and Cladosporium. Although it is worth noting that these strains do not always present as green and are also commonly seen as black or blue.

Many people are familiar with the fact that penicillin, the antibiotic is derived from a strain of mold from the penicillium family, but this does not mean that you want it growing on your food or in your home.

Although Penicillium has incredible antibacterial properties it can also be toxic to both people and animals. It causes food spoilage, prefers cooler environments and is one of the first molds to grow on water-damaged surfaces.

There are many species of Penicillium and they often appear green, may have a blue tinge and can also grow white. Penicillium tends to produce a strong musty odour which may be the first indication that you have mold if it is growing in a hidden area.

There are many strains of Aspergillus. You’ll probably have seen it growing on a loaf of bread that’s been left a bit too long as it loves starchy foods, and they are frequently found on water-damaged surfaces and may be green, yellow or black. Some strains are known to cause pulmonary infections and others produce mycotoxins.

As well as growing in your home and being potentially harmful to health strains of aspergillus are also used in fermentation and to make citric acid.

Cladosporium is often an olive green in colour, but can also be brown, grey or black. It commonly grows outdoors on plants but is also common in damp, humid or water-damaged indoor environments, often growing on walls or damp carpet.

The spores can cause allergies and asthma when inhaled and have been linked to skin, eye and sinus infections.

Where Does Green Mold Grow?

Generally molds like to grow in damp or humid environments. They not only need moisture but they also require a certain temperature range which varies depending on the type of mold but is often the same temperature range that we like to live in, and a source of food as unlike plants they do not make their own food.

The molds food source could be our food, we’ve all seen mold growing on food that’s been left in the back of the fridge too long. Or it could be any other type of organic matter such as dead skin cells, wood, houseplant soil etc.

As with other types of indoor mold the most common places to find green mold are where moisture levels are high such as bathrooms, basements, laundry rooms, kitchens and around windows. Mold also loves to grow in dark areas so places you can’t see are prime spots, and should be vigilant if you have had any water damage due to flooding or a leak.

The Health Risks and Effects of Green Mold

Although we encounter mold spores often in the air we breathe, and most of the time it doesn’t do us any harm, mold is not generally considered good for us and green mold is no exception.

Mold can cause allergic reactions particularly to those that are sensitive to mold or already have a weakened immune system, and these symptoms can sometimes be the first alert that you have mold growing in your home.

Reactions can be wide-ranging and include watering or stinging eyes, skin irritation, coughing or sneezing, sinus issues, headaches and even things like an inability to concentrate. Studies have also shown that mold can lead to an increased chance of children developing asthma and worsen asthmatic symptoms for sufferers.

Mold can also cause infections. Aspergillus can lead to a group of diseases known as Aspergillosis. Once mold is in the body it can be very difficult to treat and get rid of.

The risks and effects of green mold increase when they are growing inside as you are likely to breathe in more mold spores than you would outside.

As mentioned some strains of green mold can also produce mycotoxins that can have more serious and long-lasting effects, so it is always best to remove mold as soon as you notice it and take steps to prevent it from returning.

Give us a call to make an appointment for a free estimate.